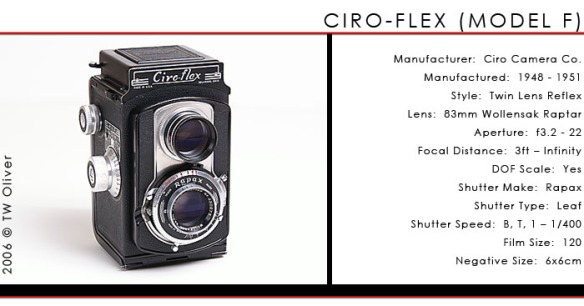 SUMMARY
This is one of my favorite cameras.  The CiroFlex twin lens reflex camera is one of the few TLRs manufactured in the USA.  Check out the fine article on American TLRs from the CiroFlex links.  Delaware , Ohio was the birthplace of this camera, while six different models were made by the Ciro Corporation, the final and best “Model F” is the premiere model of the line.  This model was released after the buyout of Ciro by the Graflex Corporation, which would also release the same camera under the name Graflex22.  Graflex was then purchased by Eastman Kodak.

The Model F features sturdy steel construction, which feels solid and well made when using this little gem.  The lens is an 83mm, coated, four element Wollensak Raptar with a Rapax shutter.  The range of aperture and shutter speeds are quite good as seen above, and the inclusion of flash synch for M & X is a plus.  Some have complained about the large viewfinder not being bright enough, but I have found that only in few situations was this an issue.  I have rarely needed to utilize the built-in magnifier when focusing.  The Depth of Field scale on the side is also quite helpful, even though it does not go up to the f/22 aperture setting that’s on the lens, possibly a slight manufacturing oversight. 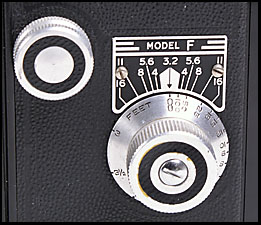 All of the CiroFlex TLRs are a great introduction to medium format photography, I find the reversed viewfinder image which is common in TLRs forces me to slowdown and really concentrate on the frame.  This in turn produces better pictures and less “from-the-hip” photography.  When you’re only getting 12 images per roll you want them to count.  Remember these aren’t Rollies or Yashicas, but for the money the CiroFlex provides quality pictures at affordable prices.

CLEANING AND REPAIR
This model was fairly pristine when it arrived, except for the usual dust that these old cameras accumulate.  Obviously most sellers don’t bother to clean up these cameras before the sale.  Some areas of the leatherette were pealing back, which is easily fixed with superglue or Pliobond.  After scrubbing the exterior with a soft toothbrush and leather cleaner, this camera looks great.  I would avoid using Armor-all or any such product as it tends to leave the camera a bit slippery.   I have discovered a small light leak.  If the angle of the sun is just right, some light gets in through the side of the camera.  This is due to the deterioration of the seal inside the film area of the camera.  A simple but time consuming fix is to take a small screwdriver and carefully remove all of the old material from the inside grooves.  Place a thin line of Pliobond along the groove and cut thin pieces of mouse pad material to push into the grooves with the screwdriver.  Just like adding new weather stripping to an old car.

EBAY SUGGESTIONS
I’ve seen all of the CiroFlex models available on EBay for various amounts, but you shouldn’t pay more than 30 dollars for a Model A thru E as these have only a three element lens with shutter speeds usually no faster than 1/200.   The Model F generally fetches more, but if you’re lucky like me, you’ll find a great deal and be very pleased.  These cameras also take the Series IV Kodak adapter and filters, and have a shutter release cord connection, so look for added accessories when searching for auctions. 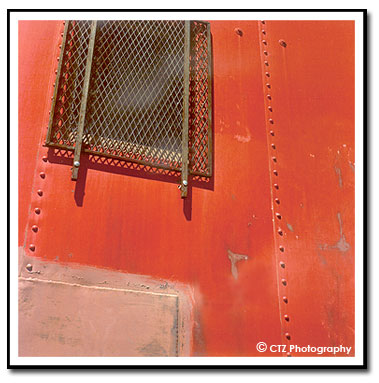 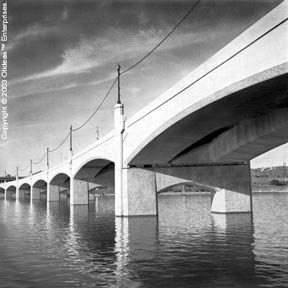