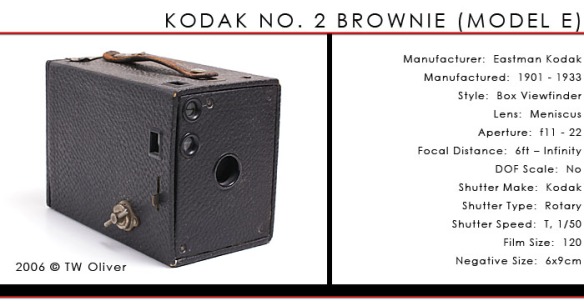 SUMMARY
At the turn of the twentieth century Eastman Kodak changed the way average Americans capture the moments of their lives. By introducing a wide range of very affordable cameras and film, Kodak created a new national pastime…photography. The first Brownie box camera sold for just one dollar and millions found their way into the hands of everyday Americans. Photography was no longer exclusive to the wealthy and upper class. The first wave of Kodak box cameras were simple, cardboard and metal models. Like the Brownie No. 2 introduced in 1901, these cameras featured a single meniscus lens, two viewfinders for landscape and portrait, and a variety of simple controls. One important item to note is that 120 roll film was introduced in 1901 specifically for the Brownie No. 2 camera, and is still being produced today as the standard film size for Medium Format photography. The Model E was the last in the Brownie No. 2 line and was sold specifically from 1917 to 1924 for a whopping two dollars. It included the round rod winding key, two small viewfinders which can be tricky to use, three aperture settings at approximately f11, f16 and f22; and a two speed shutter with the instant setting at around 1/50 of a second and Bulb for longer exposures. Like most box cameras of this type a simple, flat sheet of metal can be pulled from the top of the camera to adjust the apertures, and a second, smaller lever can be pulled up for time exposures. The shutter release is on the side of the camera and is a simple flat lever as well. The single meniscus lens is located inside the camera behind the rotary shutter assembly.

Film is loaded in the back of the camera. A hinged pressure plate, which houses the common red window for viewing frame numbers, clasps to the top of the camera back. The plate folds back and the metal film carrier can be removed for film loading. Don’t forget to pull out the film advance key before removing the film carrier. (Production note: the metal film carrier was introduced in 1919 and a metal guard around the shutter release was added in 1920.) As with many of these old box cameras the Brownie No. 2 produces a large negative. In this case, eight 6x9cm negatives from a single roll of 120 size film. Generally ISO 100 or 400 provide the best results depending on lighting conditions. Outdoor photography is the ideal situation for these types of box cameras. No flash attachments were available and as with many of these cameras, expect relatively soft images.

CLEANING AND REPAIR
The cardboard body of the No. 2 is covered in basic, black leatherette that can be cleaned up using any common leather cleaner. Usually the corners are worn and the heavier leather handle is either missing or in bad shape; after all, most of these cameras can be up to 100 years old. The small viewfinders can be cleaned with Windex or any glass cleaner. If they are fogged up on the inside, which is quite common, there are four small screws on the face plate that can be removed to reveal the shutter mechanism and allow for cleaning of the interior viewfinder windows. The shutter is a basic rotary design, and as long as the small springs are in tact, it should work fine. Lighter fluid or glass cleaner can free up most sticky shutters. The hinged pressure plate on the back of the camera is attached with a thin piece of the leatherette, and can deteriorate with time. I suggest a piece of black gaffers tape placed along the bottom edge of the camera as a replacement if necessary. This holds the two pieces together while providing enough play to open and close the back. Plus it blends in well with the black leatherette on the camera.

EBAY SUGGESTIONS
As with most vintage box cameras from Eastman Kodak they are commonly found on EBay in a wide range of condition. Ignore the claims of ‘rare’, ‘hard-to-find’, etc., as millions of these inexpensive cameras were produced during their production runs. Most Kodak box cameras from this era can be found for as little as $3-5 dollars. There were versions produced in various colors and these may warrant spending a little more but still very affordable. These cameras are light and shipping costs should be minimal. It’s always suggested to email the seller for specific shipping costs if not listed in the auction information. Study pictures of the camera closely. Usually the leather handles are missing, or there is significant wear of the leatherette. Ask about the clarity of the viewfinders and if the shutter functions. Also verify that the film carrier is inside of the camera. Do your homework, Eastman Kodak released box cameras that took a variety of film sizes such as 116, 117, 123, 103, etc. Currently only 120 size roll film is commonly found today, and is still inexpensive. While 620 and 127 are available at premium prices by special order from some internet retailers, 116 a common size for many of these older box cameras is no longer available. I highly recommend the book “Collectors Guide to Kodak Cameras” by Jim and Joan McKeown as an excellent, quick reference for Kodak cameras of the last one hundred years. Each American made camera, whether box, folder, 35mm, etc., is listed with various information such as film type, production dates, common features, etc. Finally don’t forget about garage sales. Many people don’t realize these cameras can still be used and many go for less than a dollar if your lucky enough to find one in good working condition.